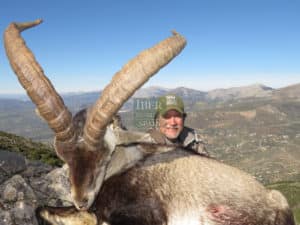 The Spanish Ibex of Ronda is distributed across the South Spain, in the province of Málaga.
Morphologically it is the smallest of the four different types of ibex which are differentiated in our country. Brought about by an adjustment to the environment and to milder winters than those of other areas of the Peninsula, it is mainly differentiated by the scarcity of black spots on its coat. The hair is shorter, with a less abundant mane and less occipital width in the cranium.
The horns grow upwards in a V shape and then backwards with a spiral twist of just 90 degrees. While this is the typical shape of the horn of the Ronda ibex, other formations may be found in this region, even within the same herd.

In the southern Spain, in the region of Andalucia and province of Málaga, we will hunt the Ronda – Tejeda ibex in the National Park of Tejeda, Almijara and Alhama. The closest airport to this area is in Málaga. In Málaga airport, staff from Iberhunting will welcome you and transfer to the Hotel La Viñuela, close to the National Park where you will hunt during the following days.

The National Park of the Mountain ranges of Tejeda, Almijara and Alhama, which extends to 40.662 hectares, is situated between the provinces of Málaga and Granada.

In our country there are National Parks known for its remarquable management of the hunt which leads us to get a good population of animals. To hunt in this areas means a strict control on the hunting licences that have to be bought before the hunting date, specifying the kind of ibex (selective, representative or trophy medals) to hunt. This ensures the continuity of the species and ensures not only the success of the hunt but also the quality of trophy that you want to hunt.

The Sierra Tejeda mountain range is the highest section of this set of montains, reaching 2.066 meters at the peak of La Maroma. Spectacular views of the Mediterranean coast and neighbouring mountain ranges can be seen from here. Rivers and streams flow rapidly downhill along slopes of these mountains, offering spectaculars waterfalls, such as The Petrified Trees, where the limestone water mineralized ancient trunks. In other places, the waters give way to some of the most impressive gorges, called Cahorros here.

Other geological elements which stand out are the Cave of Nerja, declared National Monument, and also the schim of La Maroma. Although diverse cultures converged in this area, the three mountain ranges have a marked Muslim heritage, with white villages strewn around hard-to-reach valleys and mountains.
The white and grey tones of the ravines and ridges predominate in these mountains, a consequence of the abundance of marble in the area. Settled on the white sands generated by the breakdown of marble are several varieties of pine such as the Aleppo pine or the Scots pine.

The presence of great eagles (Royal Eagle, Golden Eagle, Booted Eagle and Serpent Eagle), Peregrine Falcon and Hawk, Nightjars, forest and mountain birds, in particular the Wheatears (black, Northern and black-eared Wheatear), the Common Rock Thrush, the Blue Rock Thrush and the Alpine Accentor is notable. But without a doubt, the best known animal in these mountains is the ibex.

Your hunting trip will start with your arrival to Málaga where Mr.Antonio Teruel will meet you. He will accompany you during all your trip and will care for your hunt. After the clearance documents for bringing your riffle, you will be transfered to the Hotel La Viñuela, one of the most well known in the province of Málaga and Andalucía in the classification of Hoteles Rurales con Encanto or Charming Rural Hotels. Located in one of the most beautiful natural areas of Andalucia, this hotel is surrounded by typical picturesque villages and only 15 minutes from the coast.

Our country is also famous for its gastronomy, and in this region you will have the opportunity to taste from the sea the smaller fish (anchovies, red mullet, horse mackerel, squid and baby squid) served fried, and inland, exquisite cold cuts and filling dishes as veal in garlic and fried goat. Delicious meals accompanied by a wine of this region. Wines with denomination of origin “Málaga” made using grapes of the variety “Pedro Ximénez” and “Moscatel”. These wines clearly show a Mediterranean nature, sweet and velvety.

After the dinner, it’s the time to go to rest and recuperate for the following hunting days.

The hunt itself is a classic mountain hunt that starts in the early hours in the morning. After the breakfast time, we will drive with the rangers of the Natural Park to the hunting area. Then we will continue the hunt by a silent stalking using binoculars and scopes to calculate the distance and size of the trophies. Shooting distances may be in the range of 150 – 250 meters.
Recommended calibres for this hunt are 300 WM, 338 WM and 270 Watherby. In most cases you will have time to get a confortable rest for shooting, but sometimes you must be able to manage quicker shots.

The normal itinerary for a selective or a representative Ibex is two hunting days with three nights accommodation. For a trophy hunt, we add one more hunting day to the program. In normal weather conditions we score a 100% of success in our hunt.