Driven Hunt in Spain: the history and roles of the Monteria

There is a driven hunt in Spain that is the most traditional hunting method of the country. But do you know what it is exactly and what are the roles in the Spanish Monteria? To understand this very old and traditional Spanish hunt Iberhunting offers a unique experience with two or three huntings days.

Did you know that Monteria is a form of big game hunting whose origins are unknown? The first comprehensive accounts of monteria date back to the late Middle Ages.

Medieval monteria developed independently in different territories and countries and today these traditions differ substantially from one another. These include the north of Spain, the French Venerie, fox hunting in the United Kingdom and the monteria known today as “a la española,” which is practiced in the central and southern parts of the Iberian Peninsula.

Led by their respective dog handler, the “rehalas” are released, moving in from one or more ends of the brush. They beat the brush in different directions so that the fleeing game attempts to break through the hunting lines (known in the South as “monteros”) or are spotted by them. Although this would appear to be a very planned action, the truth is that monteria is a form of hunting that requires a high level of observation, attention, silence and accuracy (with moving targets) by the hunter and gives the wild boar and deer a real chance of escape. 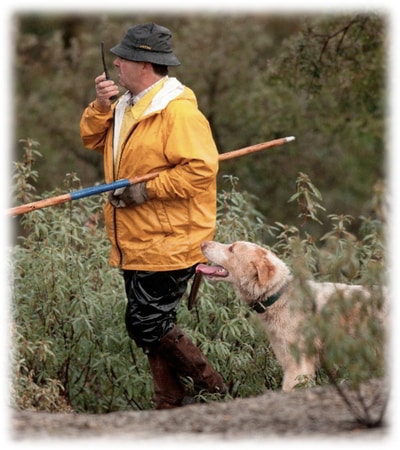 Roles of this Spanish Hunt

This driven hunt monteria is a collective form of hunting that involves a number of different roles without which the proper development and success of the brush beating is impossible.

Each rehala has between 10 and 12 pairs of dogs and is driven by a dog handler known as the “perrero” or “podenquero”.  They are the real stars of the monteria.

The “montero” is the hunter 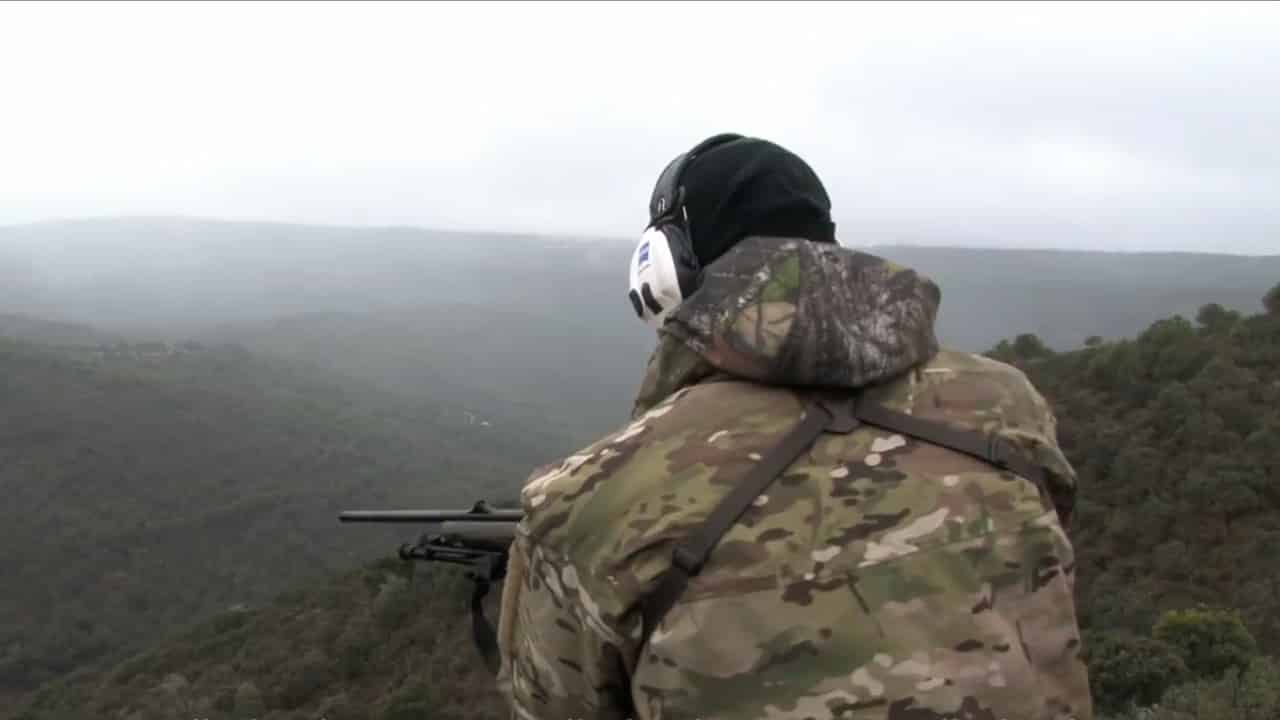 and is a fundamental person in the development of hunting. Because the day’s hunt depends upon strong performance and accuracy of the hunter. The “montero” should be someone who respects the hunt and the environment, a defender of good practices and traditions who follows the written and unwritten ethical rules of the hunt. The best “montero” is not he who obtains the most trophies, but rather he who hunts the best.

The managers of balance in the hunting territory

The proper care and hunting management of these individuals permits an impressive variety of game to inhabit the sierras of Spain, making it one of the preferred destinations for hunters around the world.

The “Maestro de Sierras” is responsible for directing and coordinating everything involving and happening in the monteria. He must have firsthand knowledge of the hunting terrain and decide with the rangers the best way to place the right number of posts to close off the brush securely and assemble the necessary number of rehalas for an efficient hunt.

The “postores” are in charge of placing and removing the “monteros” from their positions and for targeting the game that they have killed in order to organize the collection with the “arrieros”.

The “secretarios” (secretaries) accompany the hunters to their post and their mission is to control the movement of the game by the post, everything carried out by the “montero”, targeting any shot, fallen, injured and beaten game. 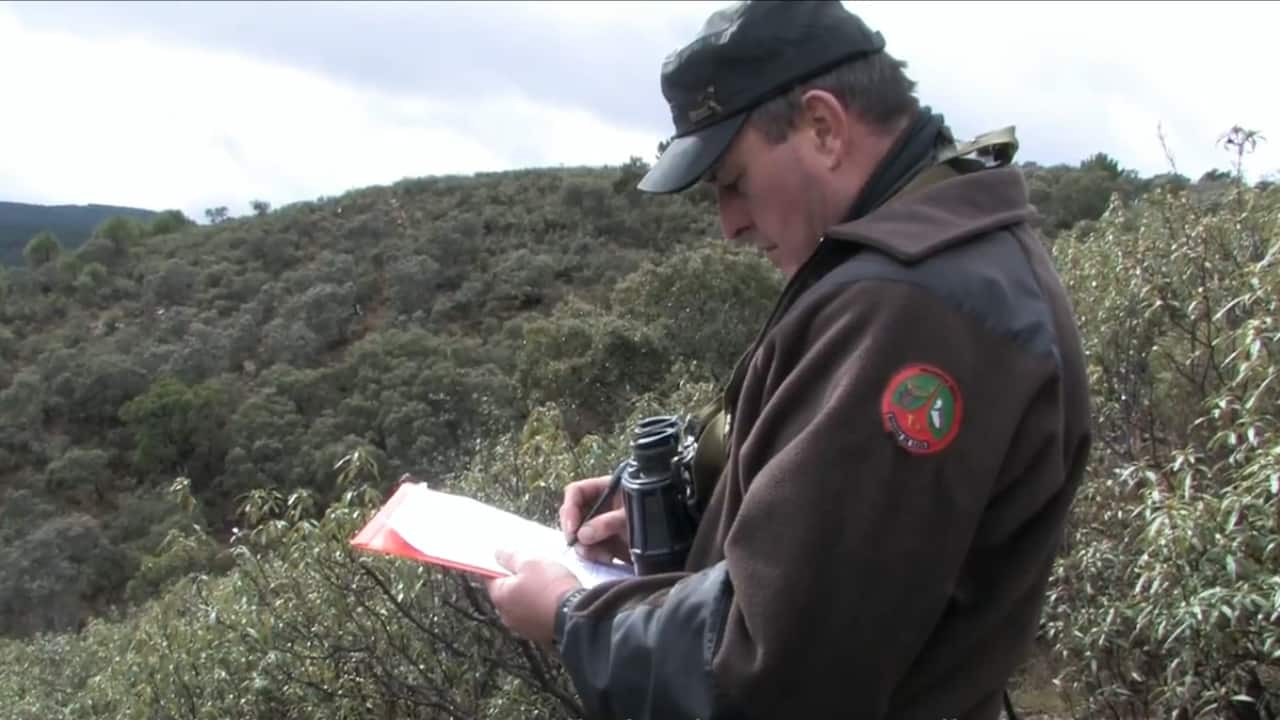 The “guias” (guides)  are in charge of placing the rehalas on the field, controlling the release and the progress of the hunt so that the brush beating is  performed under the agreed upon conditions and the course of the dogs and the “rehalas” on the brush is kept organized. 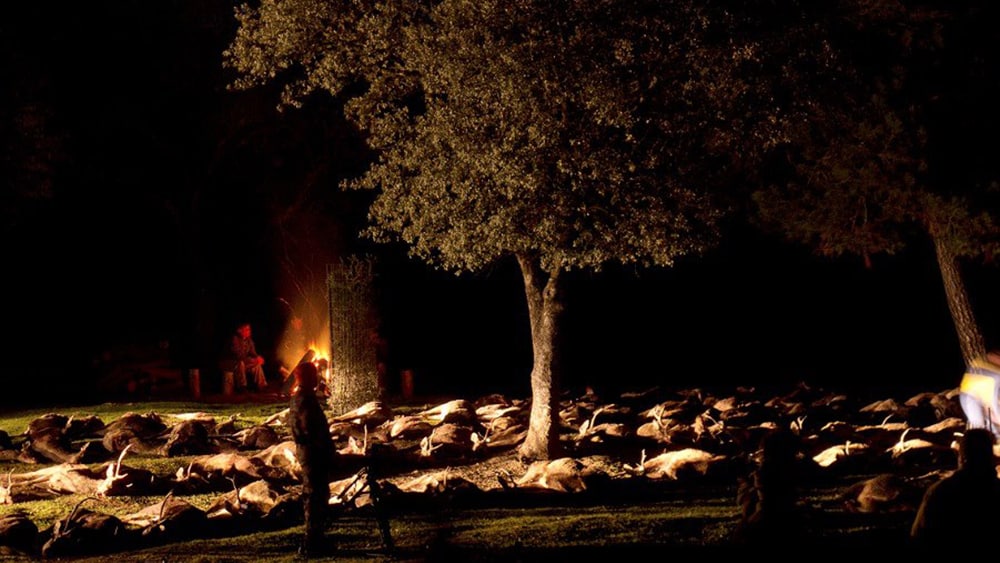 Their work is just as important as the rest of those involved in this driven hunt. They are in charge of gathering the fallen game and loading them onto the vehicles to be taken to the “junta” as quickly as possible. 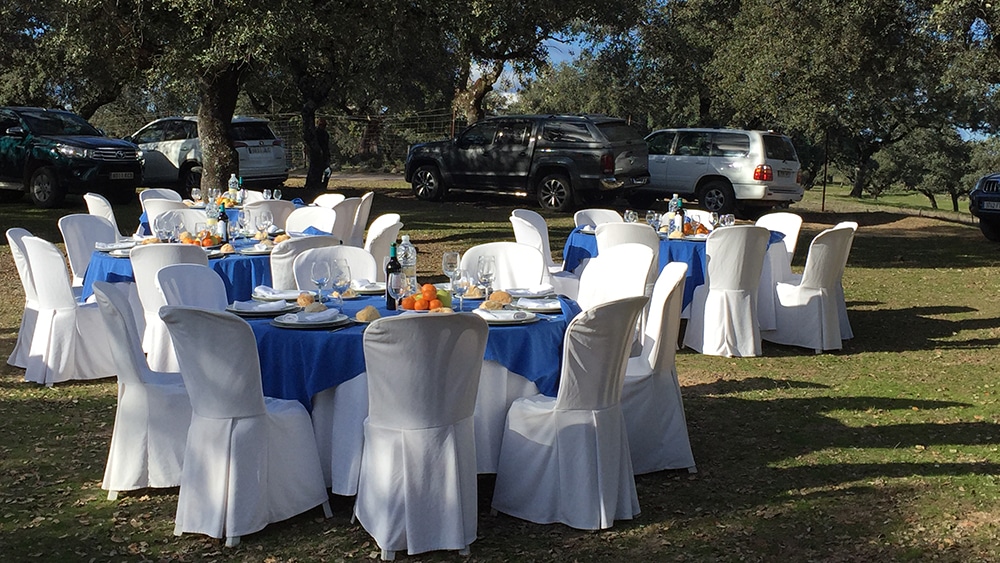 As is the case with the rest of the personnel involved in the above-mentioned monteria, the work of these last individuals also contributes to the smooth development of the monteria. It is an unwritten law to recognize their contribution in making our fine form of big game hunting a unique and unparalleled form.

Live this unique experience at least once in your hunting life!

Dates for next Spanish Monteria: