Lion hunt in South Africa: in search of his tracks

We began a new lion hunt in South Africa, my home. A place I have explored every corner of and yet I still find myself experiencing new adventures every time I lace up my hunting boots. Time and time again hunting has given my life purpose and taken me on grand adventures, for this, I will be forever grateful.

Armed with only my camera we head out in search of lion tracks. I had only heard stories of this particular lion we were after. I imagined his great black mane swaying from side to side as he walked the same path we were now walking. I thought of how big his paw might be against the palm of my hand and how many teeth he may be missing after his numerous battles in the African bush.
Something I knew for sure was that we would be encountering the king of Africa at some point within the next few days. Would I instinctively take a few steps back when he appeared? Would I turn and run? Or would I stand my ground, find focus, and film our encounter? This was after all why I was there. 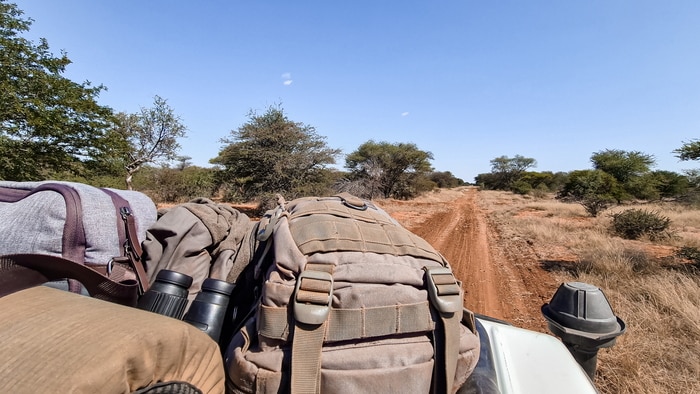 For four days we had been searching for this lion. One night he would continuously roar loudly, another he would be deathly silent. One day we would see his tracks all over, another we could find nothing.

It was hot and my sweat dripped over my camera lens. The terrain was rough and the grass was long. Every bush we passed was inspected with great caution. He could be hiding anywhere. 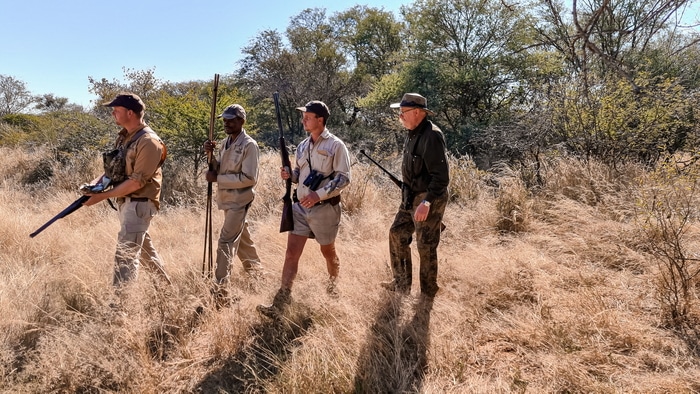 We stopped to listen. We could hear a thunderous crunching noise off in the distance. It was the sound of a king feasting on the bones of an impala he had caught that morning. With every crunch, we edged closer to the sound keeping our senses at full alert. The smell of the lion was in the air around us. We knew we were close. Then the crunching stopped. Did he know we were there? Had we made a mistake? We stopped and listened intensely. No one made a sound or dared to make a movement.

It was deathly silent. We could hear nothing. In sync, we edged closer. Peering around every bush and into every opening. Where could he be hiding?

Looking into the lion’s eyes

Then he appeared as if out of thin air. Not hiding in a bush waiting to pounce but proudly strutting across an open area just ahead of us. Four days on his tracks had led to this moment. This was it. The shooting sticks were hastily placed and the client’s rifle rested steadily on them. I found my focus and stood my ground. Through my viewfinder, I could see his piercing eyes searching the bush for us. We had disturbed his feast and he wanted to know why we were there.

The lion stopped for a moment and the shot rang out. The beast bolted for a nearby bush. Only his eyes could be seen peering out at us. Deciding if he was going to attack or make another break for it. Before he could make his decision the client’s rifle cracked again and the lion buckled under himself. We could see him peering out at us no longer. 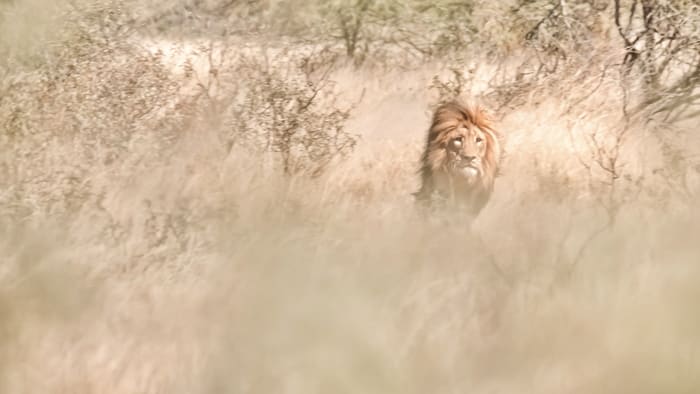 Giving him some time, just in case he had any life left in him we waited in the shade. Our eyes never left the bush he had entered. We could not be sure that he would not take his last opportunity to grasp one of us in his claws when we walked towards him.

The professional hunter used the barrel of his rifle to ensure he had truly met his fate and he indeed had. There was no reaction from the lion after prodding him. All those kilometers for the lion hunt in South Africa, on his tracks, sweat, planning, thinking, and rethinking had led to this.

I immediately got into position to capture the client admiring the incredible beast that lay before him. He ran his fingers through the lion’s mane and placed the palm of his hand against its paw in absolute awe and wonder. The very same awe and wonder we were all experiencing. 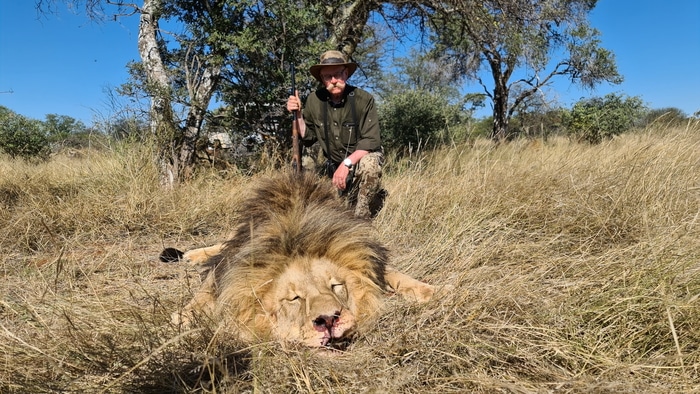 Why I’m a hunter

One of my most favorable moments as a hunting filmmaker and photographer is capturing the admiration and respect hunters show to the hunted. After all, when a life has been taken the utmost respect must be given. Seeing that admiration and respect in a hunter’s eyes reminds me why I do what I do and why I continue to do it.