In our last blog post from Turkey, we tell you about a great hunt where the hunter managed to shoot down a great ibex. However, the animal was to stop into a small cave in a mountain wall with a depth of more than 300 meters. After this, the rescue team park rangers and guides were waiting for the snow to disappear to take the ibex. Hopefully, after 10 days the sun was doing a food job and the rescue team could go to get the animal out of the cave.

Everybody agrees on a day to go to collect the bezoar ibex but what was the surprise that when they reached the cave the ibex was not there! At first, everyone was very nervous and worried because it was a great trophy and all kinds of ideas crossed the mind of the team. Could it be a bear, the wolves, or even the poachers!

The surprise with the hunting trophy

So they decided to approach the mountain wall and try to clear all those questions that had been put in their heads. I imagine all of them and their faces, with a shock that the hunting trophy had disappeared.

But before they reached the place, the older park ranger observed many crows and vultures around. So they realized immediately what was happening! After so many days dead inside the cave, the birds would start to eat. And if any of you have seen how vultures usually move the body between 20 or 50 vultures, then you will understand what is happening. So between vultures and crows, they moved the body from inside the cave to the outside until it fell down the mountain. The luck was that the Ibex fell on a large tree, so it was hanging 20 meters above the ground. Otherwise, the trophy would have been broken. 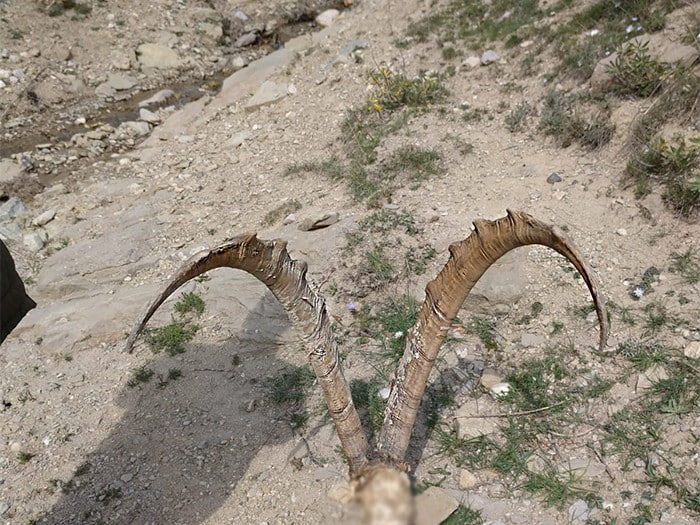 So finally our friend and hunter got his hunting trophy. Maybe not in the way we would like, but the most important thing is that we have found the trophy. This story ends with our hunter celebrating at his home with his family having recovered his great Ibex Bezoar.

The combination of Ibex Bezoar with wild boar is also possible, contact us for more information: [email protected]